Roller Rink Starlight is a memoir by William Hart that wistfully recalls the 1960s when he was young. Dominating the book is the passion, in a climate where lies the coolness to let yourself be penetrated by its fragility. And, in this sense, the book becomes a symbol of a society evolving to manage relationships and affections. The book, on the other hand, offers a lucid look at those times gone by.

The prismatic characters, the relationships connoted in all their complexity, mean that with the never tragic yet profound ironic touch, William Hart makes us reflect on the institution of the family and monogamy, and prefigure the fragility of some conquests that all epoch seemed imminent, like equality between the sexes.

Set in Wichita, Kansas, William Hart traces his relationships with Katy Linsey, at the tender age of fourteen and later with Lauren McCabe, that changes his life later. They were young and at the mercy of their inner world, of shyness, of prudery, of the unspoken, of lack of self-confidence, of repression.

Their story - like ours, even if we don't want to admit it - thrives on choices dictated by the moment, by chance, and by fear dictated by inexperience. The protagonists, ultimately, represent the personal cataclysm that has involved generations and generations of young people, but carried on with the best of intentions.

William Hart also reminisces of the roller rink, a neutral ground where the sexes can meet, without all the usual hype. On the track there were no purists, with their sharp eye and sharp tongue, so the skaters were happy. Holding hands and whispering sweet little words got easier with no chaperones in sight.

So at last the prolonged eye contact replaced the hidden glances fearfully exchanged with the loved one. Young men and women could spin on wheels, wearing the fashionable outfits for the runway. Certainly, the clothes that began to be worn did not respond to the formality of the time.

It is true that this mini-revolution cannot be compared to the sexual revolution experienced later, but at least it offered a little more freedom. If youth has good attributes, don't these shine best amidst the buzz of the wheel track? If a maiden is graceful, isn't her grace all the more charming when enhanced by the poetry of movement?

Above all, is not skating better than any other because even the most awkward effort to balance or strike a pose is assisted, in the case of the weaker sex, by a gentle and respectful, yet firm and sufficient, support of some skilled gentleman, whose timely help and expert advice makes the slippery path less icy?

Roller Rink Starlight is a novel that portrays the novelty in the love and sexual relationships of a generation, but also foreshadows the long-lasting consequences that would come.

Most relationships between men and women, were probably irreproachable. They often ended in a desired and happy marriage. But not before dismaying some old-fashioned person, who saw or heard that a girl had turned in the arms of some young man who had just met, or perhaps even one who had not even been introduced.

Encounters like these became the rule later, but at that time they were truly revolutionary. In the authors words, it was an era of trapped men and women unfulfilled. Roller Rink Starlight is about an era that throws light on a society and the general behaviour and thought processes of men and women. Or rather, it talks about the power that sex had (and has) and its denial in the minds of many generations.

The author's writing style, the power of the story, the characters, will make you fall in love with them. Above all, the osmotic capacity that the memoir has will penetrate you deeply. Here, with Roller Rink Starlight it happened. William Hart dragged me into his story in the span of a few pages and his skill was of being able to immerse me so intensely in the middle of a personal drama.

The stylistic choice produces very noteworthy steps. The author with this punctual style, combined with a unique skill in sewing the action that takes place in his coming of age years tells his past, and succeeds in giving us the simple rawness of a story of love, a dance out of tune, danced by people who each go with their own rhythm.

Ultimately, this book is a short and intense masterpiece made up of images, unspoken thoughts and fears, capable of upsetting and overwhelming intentions. The book is presented as a confession to an imaginary listener, of which there is a sign only at the end, with a final line. Written in a masterly way, it strongly involves the reader and is full of considerations on an era, the passage of time and the transience of life.

All this is made even more evident thanks to the expressive power of William Hart's writing which seems indisputable to me. It is a very special book. I started it and I have not been able to stop until the end. The book is very intense at times and deals with crucial themes such as love, desire, sex and relationships.

This book has in itself the evocative power of a film, the placid, magmatic, dense slowness, the epic of lost vagabonds under the sky, significantly represented under the tents of a campsite, but also the melancholic abandonment.

Perhaps while reading, you do not really have the perception of the beauty of the text, but once the last page is closed the reader is pervaded by a fierce nostalgia, by the emptiness that only those who, until a moment before, have held in hand the secret of a morning in an air of glass.

The atmospheres are hypnotic; they alternate between deep and moody blue, contemplative violet, soft oranges both autumnal and evening, speleological interstellar blacks that feel palpably empty. 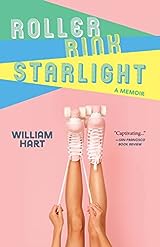 It is a story painted by someone who understands the language of rain at night, which includes the feeling of being alone in a crowd, which includes the many meanings of blue such as loneliness and depth of the sea, depth and ice, and deception of purples and oranges as body heat against body, grazing fire, equally deserted worlds of life and worlds of xeric absence.