The Society of Necessities by Christopher Bowron is not an easy novel, but it's certainly out of the ordinary. It is not easy to tell you about this book because I think that every word would be trivial compared to its beauty and complexity. Set in breathtakingly beautiful places and narrated with a style capable of captivating the reader, the book is an intense and impossible to forget tale.

We are faced with a plot whose outcome is by no means taken for granted and which indeed seems capable of reversing, in the end. Daniel St Croix, the protagonist, will find himself investigating the mystery of his estranged grandfather’s estate-including a gold wedding band holding a powerful secret.

Daniel must read Pierre St Croix’s well-kept journals to unravel the puzzle as he finds an obscure secret society in his pursuit. From here Daniel sets out on a journey to unknown and mysterious lands, involving the reader and guiding him along a path that is often full of misunderstandings and a priori judgments, but without in any way becoming the bearer of absolute truths.

Life, stories and people but above all the secrets hidden by time will be revealed. The intent is clearly to provide ideas for further reflections in the hope that after this first journey inside a labyrinth where there is a plurality of doors ajar on history, tradition and initiation. Some readers can undertake other journeys following their own inclinations and passions.

The Society of Necessities is inviolable by its very nature. The author, starting from this idea, develops a unique and beautiful story, full of art, and tender memories. The protagonist Daniel St Croix is carefully outlined in his evolution (mystical but also psychological) to the point of pushing the reader to become attached to him.

The most fascinating element of the book is the progressive discovery of that ancient wisdom as much as the protagonist. Even the melancholy that pervades the final part of the book is a non-coincidental figure of the era of which it is narrated.

The Society of Necessities is an enchanting novel, which captivates from the first page thanks to its fluid and evocative writing. Dragged into the plot, you can no longer get out of it before the end, because you don't want to. Intriguing and full of mysteries, since if the title tells us that there is a secret, in reality there are several.

As with a matryoshka you discover a truth, which contains another and so on. The title of the book seems an omen of a story almost pervaded by a cloying romanticism. All-round characters created with the thickness of real people, will give us company by involving us in their stories and helping us to reveal the deceptions hidden and unspoken for years.

A work of fiction, an authentic mystery, with a hint of romance, The Society of Necessities is a book you will love. Christopher Bowron has opted for an argument full of intrigues, ancient civilizations, legendary objects endowed with incredible power and all this seasoned with a dose of adventure, magic and humor that greatly enliven the reading, a formula that is repeated throughout its trajectory but of which you never get tired.

Something that has caught my attention throughout reading this book is the great wealth of vocabulary that Christopher Bowron enjoys as well as the mystery that surrounds the narrative: both aspects have pleasantly surprised me. It is true that the author has managed to develop the suspense intelligently.

There are plenty of surprises, twists and turns, and the action is very well measured and distributed. In addition, the narrators are continually interspersed, almost always when the book reaches the most interesting part, so sometimes it is difficult for you to stop reading.

There are more than 300 pages, the plot is intricate, sometimes complex and, especially at the beginning, difficult to follow because you have to get to know all the characters that Christopher makes move before our eyes. But it is an effort that is worth doing, also because the author has scattered along the book little summaries of who is who.

Then the plot takes off and the reader enters a world where fantasy lives at the same time, the mystery novel is a detective story of other times, where men and women are intelligent and superior beings even if the culture of the time does not value them. As for the plot, it keeps you on your toes and has the advantage of being able to follow it without particular difficulties, which are found with long novels like the one in question.

The Society of Necessities is an enjoyable novel, with the unmistakable style of the author and his typical irony that makes you smile even in the worst moments and that makes you recognize the writer behind any story. Also in this new novel, there is a continuous oscillation between good and evil. Between the right thing to do and the wrong thing, between the things to say and those that are best kept quiet.

The Society of Necessities is a magical book where reality loses its contours, becomes stretched. There is an unmistakable smell for lovers of literature. It is what you breathe deeply as you enter a bookstore or when you walk through the shelves of a library. It is a smell that smells of home, of promises, of new adventures.

The landscape in which the events takes place has this scent. You’ll seem to be immersed in a fairy tale, and perhaps, in some way, it is so. It is a book where reality loses its contours and reveals a glimmer of magic. And in the intersections, the spark of unfulfilled desires peeps out from time to time. 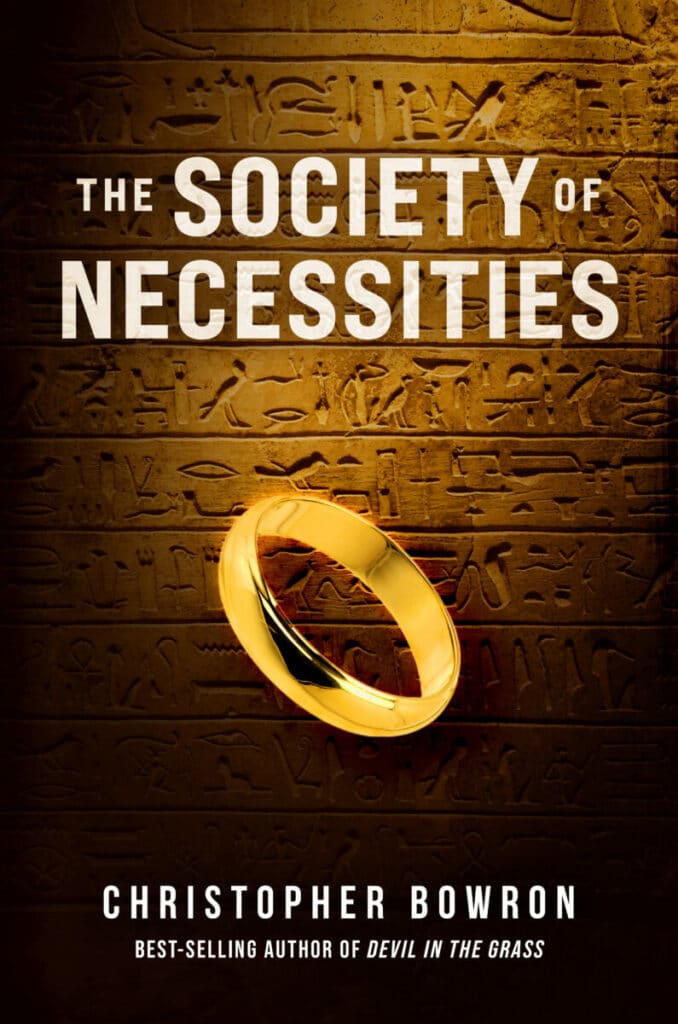 This novel really conquered me, from the very first pages, both for the narrative style and for the story and all its mysteries. The descriptions are palpable, capable of transmitting sensations, from the nostalgic atmosphere of the present to the wildest and most sparkling one of the past, from the cold-humid English countryside to the hot and suffocating west.

The Society of Necessities by Christopher Bowron is not one of those novels that is to be devoured with a light heart. The pages scroll by feverishly, alternating different moods. You want to know and at the same time remain in the dark.