Serena Aisling, the protagonist, is a woman who is as strong in appearance as she is sensitive inside. Serena knew better than anyone what it was to have a painful past, as her millionaire father abandoned her at birth to be raised single-handedly by her mother.

After working cleanly and professionally, her life is turned upside down when she is sent to Helsinki to design a production process for a new product at the Mäkelä Group, ruled by the coveted bachelor, Matias Mäkelä. Serena is immediately drawn to the attractive, overbearing CEO, causing internal conflict.

It had not been her intention to keep Matias from herself. She was just trying to do her job but it didn't take her long to let him bewitch her completely. For years, no one had dared to approach and disturb her fragile peace. But suddenly, a ray of hope came to her world, someone who filled the shadows of her past with light.

Matias was everything she could dream of. Attractive, protective, educated, romantic and despite everything, a shark, both in business and in bed. So little by little Serena is more and more attracted to him, not knowing that she is holding back, in love with him like never before.

However, when Serena unleashes her desire and begins a relationship with Matias, she will experience the most intense pleasure of her life. Serena finds herself under the tutelage of Matias, who becomes first a friend and then, a lover. Against the backdrop of the cold Helsinki, where silence counts more than anything else, Serena and Matias get totally involved and indulge in their obsession.

Will they be able to grant their hearts the intoxicating happiness of a dream that finally comes true? Will Serena not be destroyed by the perverse mechanism at the Mäkelä Group as a dangerous industrial spy is lurking somewhere to do anything to get to his goal?

A few mysteries are hidden, together with secrets, perversions, lies and desire for revenge fueled by hatred. And in all this, however, I have not talked about the other characters deliberately because I risk telling you too much and I would not want to ruin the suspense by making involuntary spoilers.

This is a book that must be enjoyed in blissful ignorance, without first knowing exactly what the plot is about. The secondary characters are interesting and certainly important for the development of the plot. I can't talk about the characters because often in this book things are not what they seem, and the characters almost all have a double bottom like the smugglers' suitcases.

Allow me now to dwell only for a moment on something that is close to my heart. You who know me well know that I read everything in the romance field but that erotics are undoubtedly my favorites, especially if there is also suspense.

For this reason, I can well consider myself an impartial and prepared voice on the subject and I challenge anyone who has truly and completely read "The Billionaire's Secret" to say that this is not a great book, well written and finally edited just as well.

The first clear sensation I had from the beginning was to have a very well written book, with a compelling story and engaging, perfectly outlined characters, gloomy and distressing atmospheres alternating with other sunny and serene ones.

Then, as the story becomes more intricate, the plots intertwine, the characters often turn out to be different from what they initially seemed, my involvement was almost total. I was hypnotized, as if stunned by a powerful spell.

In an exciting and sometimes comic alternation of events, between unexpected revelations and intriguing bickering, Ravina Hilliard's new novel gives us the portrait of two strong personalities who collide and discover they are made to fit together.

The author in a fluid and pleasant narrative voice was very good at developing the suspense plot so much that during reading you are constantly breathless, always attentive, waiting for the following twist, the new revelation, the unexpected clarification.

Obviously not only the right elements are enough, it also takes talent to know how to combine them and to tell a story that knows how to capture the hearts of readers; and Ravina Hilliard succeeds.

In practice, Ravina Hilliard makes us "feel" the vibrations, the chills and the powerful passion that unites the two protagonists in all the scenes where they are, while in the other scenes she manages to make you remain detached. The involvement is all cerebral and not hormonal. 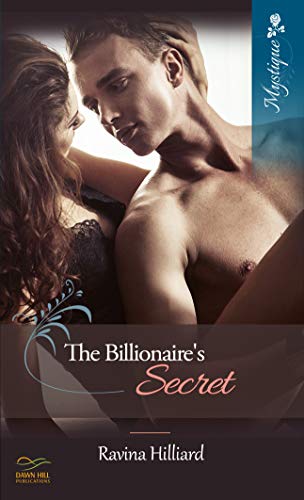 I am happy to have been able to read The Billionaire's Secret, indeed very happy, because it is a truly beautiful and surprising book, which will leave you satisfied just like its charming protagonist. The two protagonists are really nice, their chemistry is evident, between salacious lines and immediate harmony. They are two perfectly coincident pieces.

Undoubtedly it is intense, dark and torn at times, but it also has its dose of love and unbridled passion. Reading this novel I felt different sensations. There is a bit, but a pinch, of suspense that does not hurt and that gives history that something that attracts the reader.

If you accept a couple of choices with forced eyes at times, the result is a nice book, pleasant to read for a few hours of relaxation without too much effort. If you are looking for a nice story, my advice is to give it a chance.
Next Post Previous Post
contemporary fiction,romance